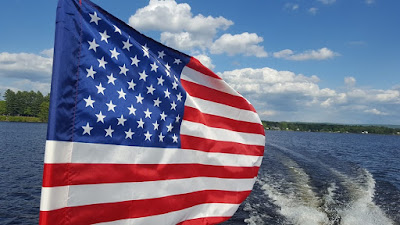 Hello everyone sorry for the long delay in lake reports.

Water, water, water. As everyone knows its been raining since April.

Between that and all the snow melt, the lake was at record levels in mid-April, going over the top of the spillway a couple of feet. They let it down the best they could by the beginning of May but with the continued rain, the level found itself back to spillway elevation. So basically what that means is you’re going to find the water 3 feet higher than you’re used this time of year.

On a good note this makes it very good for boating. You can go just about anywhere on the lake and not have to pay much attention to the danger boueys.

All the marinas and restaurants have finally put their docks in. The i-go-inn got the rest of their docks in last week. Be aware at some of these places, like Lakeside, i-go-inn and Wallys, you may have some temporary extension docks or ramps to get you to shore because of high water. These temporary docks can be tricky to walk on so be careful. (But they’re a great test of sobriety.)

Unfortunately there’s not much island at Sand Island, the Trap Islands are under water except for a bit of brush, and the picnic area and some camp sites at North Hampton are under water. You can obviously make it through Stump Alley and Mosquito Bay with no problem with any size boat because there’s 9 feet of water. The other positive is you can go way up the bay beyond Lakeside, and also way up the Sacandaga river where it widens almost to the bride that crosses on Route 30. These are great spots to do a tie-up. Since there’s not many land spots so floatilla’s will be popular for the next few weeks.

Don’t forget band in the bay on June 29th at Driftwood, that will be a big floatilla! If it stops raining the lake should go down two feet by 4th of July.

Fishing Bass has been biting good. The season just opened Saturday so you can keep them now.
Northern Pike have been biting moderate, with some reports of 40-inch plus fish being caught. (I had one in the store at 45-inches.)

Walleyes and Perch have been kinda slow, and there have been no reports of Trout.

Water temperature Surface temperate is 64 degrees and 58 degrees at 20 feet.

Make sure your bilge pump works.
Posted by Emery Designs at 6:59 AM